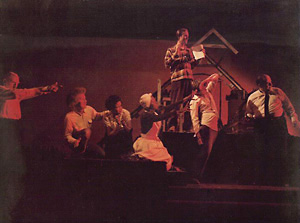 He also collaborated with composer Michael Wartofsky to adapt a chamber opera of Frederick Busch’s biographical novel about Charles Dickens, The Mutual Friend, which was performed in Boston, Massachusetts. He performed in his adaptation of Robert Browning’s The Ring and the Book at the Armstrong Browning Library and in Austin, Texas, where the production was nominated for a B. Iden Payne Award.

For inquiries about adapting and directing, please contact John.

Anderson teaches performance studies and communication courses at Emerson College such as “Oral Presentation of Literature,” “Performance as Cultural Criticism,” and “The Evolution of Expression.” He has also served as a consultant on living history for such organizations as the Tulsa Arts & Humanities Council in Oklahoma and Hofstra University’s “Democracy in Performance,” a day-long series of historical performances in conjunction with the last Presidential Debate in 2008.